Let’s start with an observation

The owner of this site programs and designs apps and websites. He also designs icons.

There are a lot of “kids” doing this kind of thing nowadays.

I have drawn a fun1 illustration of this concept below: 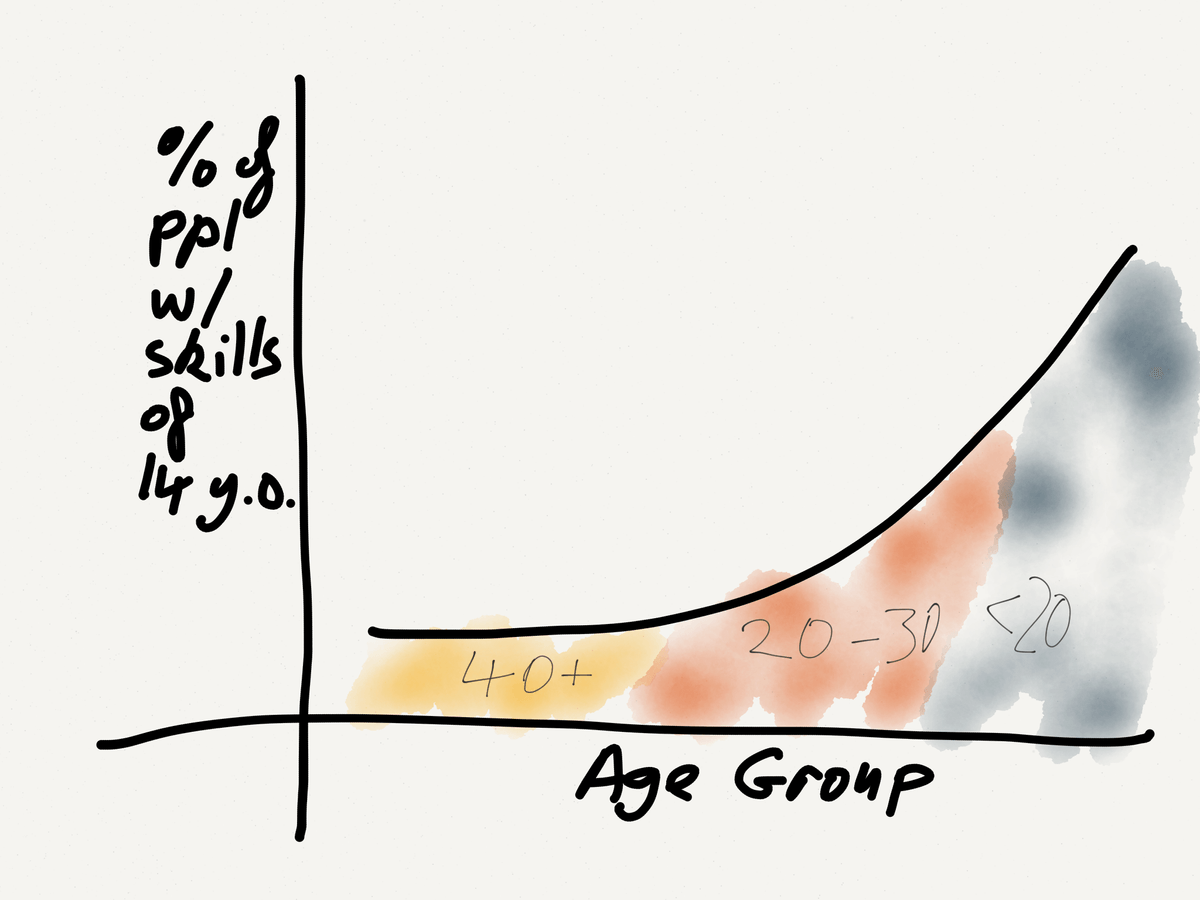 This 14 year old’s skills have an important place in future economies.

I believe these skills, and others we currently regard as specialist skills, will become trivial skills in the future. The only unknown is when.

Think about the skills you have that you use at work every day. Which of these are skills that:

I can think of photocopying, typing, managing schedules, managing digital content, taking the elevator to the correct floor, making coffee.

These are all skills now considered so trivial that everyone is expected to do as part of their daily routine2.

A little bit of background

Whether we take a salary or run a business, we are “hired” for a “job” to be done. A “job to be done” is a useful framework to help understand what motivates and drives the business transactions underpinning the economy. Customers buy things, and businesses hire people because they find themselves with a problem they need solved.

Employees acquire skills and business operators apply these skills to solve the customers’ “problems”. These skills may be advanced degrees or acquired through work experience.

Problems get solved in new ways all the time.

As a consequence (or as a cause depending on the circumstances), businesses devise new or better ways to do things - requiring less employees or those with a different mixture of skills.

A little bit of illustrating

Below, I’ve drawn conceptually how salaried jobs/roles evolve over time: 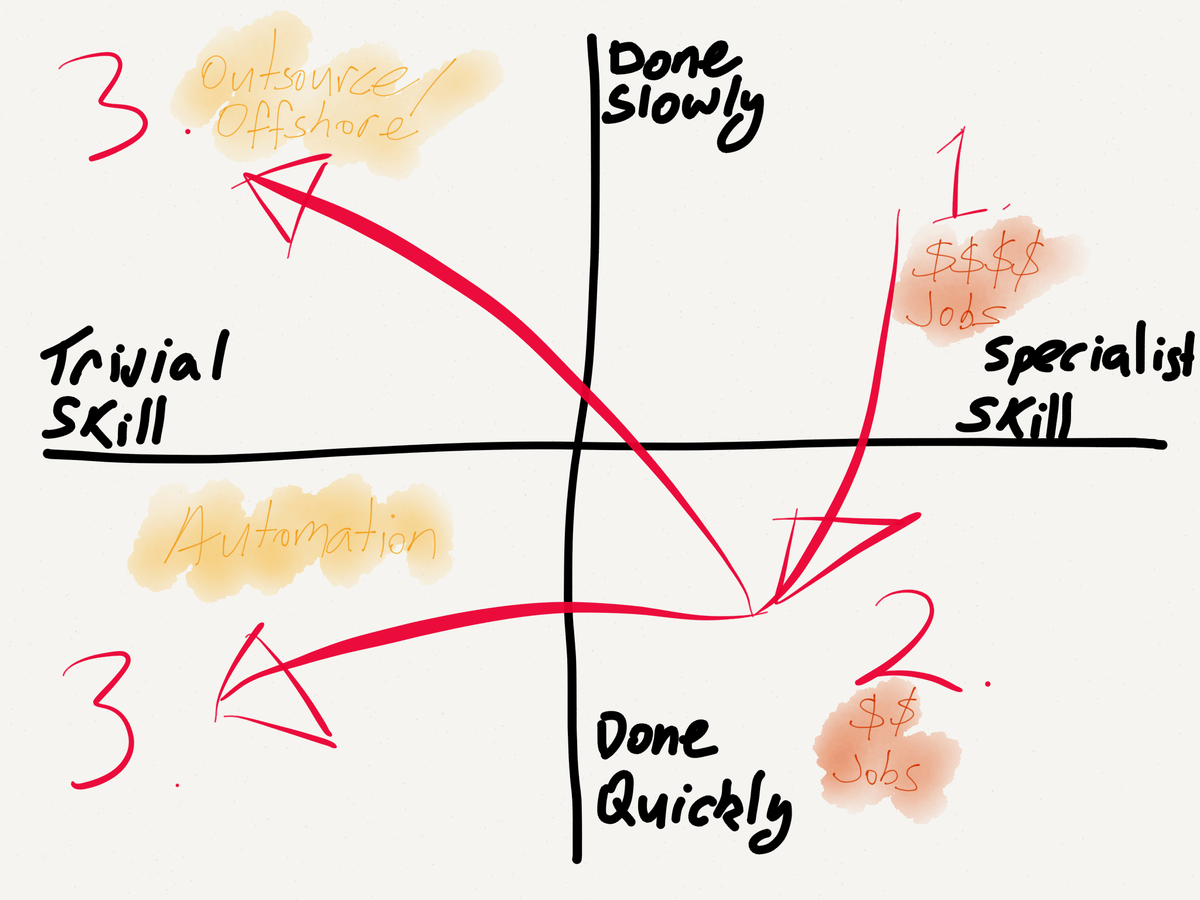 For example, accounting and financial forecasting used to take ages. It used to takes ages and required an army of people. Educated people. Expensive people.

Businesses used to hire MBAs to model fancy financial concepts - and these MBAs could do it, they just needed an army of people recalculating every number whenever an input changed (which was often)4. Businesses used to also hire armies of accountants, pencilling in entries into giant ledgers (made of paper5).

Then these machines started popping up - Apple II’s with VisiCalc to be exact. Spreadsheets!

Spreadsheets made these tasks orders of magnitude quicker and as a result requiring less and differently skilled workers. Then, as computers became easier to use, spreadsheets quickly went from a specialist skill, to basic junior level work, to an expected skill. The operator transformed from a skilled analyst, to a macro button pusher and then into an ERP system generated report. The ERP systems are now all cloud-based6 and can be hosted and used anywhere by anyone, or, one day, by no-one at all.

So what we’ve seen over the last 30 years is that most of this work has been automated or offshored or done by one person when there used to be three.

The problem is still there. The job is still being done. The solution is just different.

Finally to my point

These are the exact same jobs we currently think need “professional” training and expertise. The only thing we don’t know is which jobs and when. Some will make this transition over the next 5 years, others, 25 or 50 years. Given we are all living longer lives, there is a high chance we will experience these transitions. Some of us already are.

We have seen this happen to the automobile industry and more recently to the publishing industry.

The transition is slow and the signs are not obvious. It’s easy to attribute your salary freeze or company’s decline in sales to the economy. Yet, at the same time, a Google engineer’s starting salary is $100,000, the Dow Jones closed at a record high of ~18,000, and the revenue growth of Google, Amazon and Apple is phenomenal.

These businesses are not in new markets. Advertising, retail and consumer goods have been around for a very long time. These business are simply approaching the “job to be done” in a new way. New ways that require new skills.

These examples are also not unique. Just look at the steady stream of businesses starting up. Most are just solving old problems in new ways; and the few brilliant ones are solving new problems, creating new markets.

Having my professional skills become worthless one day is the one thing that scares the shit out of me.

One way to stop that from happening is to have substantially more useful skills than a 14 year old.

Salespeople at Microsoft are naturally optimistic, probably everywhere. Just tell us where to go and we’re gonna run! And I know we’re gonna succeed! Because people want to believe. Engineers, you say, here’s where we’re going to go, and the first thing they say is, oh, come on.

That’s not right. That’s not the right way to go. But I have found - and this might belie my fundamental optimism - that the engineer’s optimist is sometimes a little different than the salesman. While the salesman just says, where to go, charge, the engineer likes to say, the world is all screwed up, but I can fix it. That’s an engineer’s optimism to me. Everything’s— but I can fix it 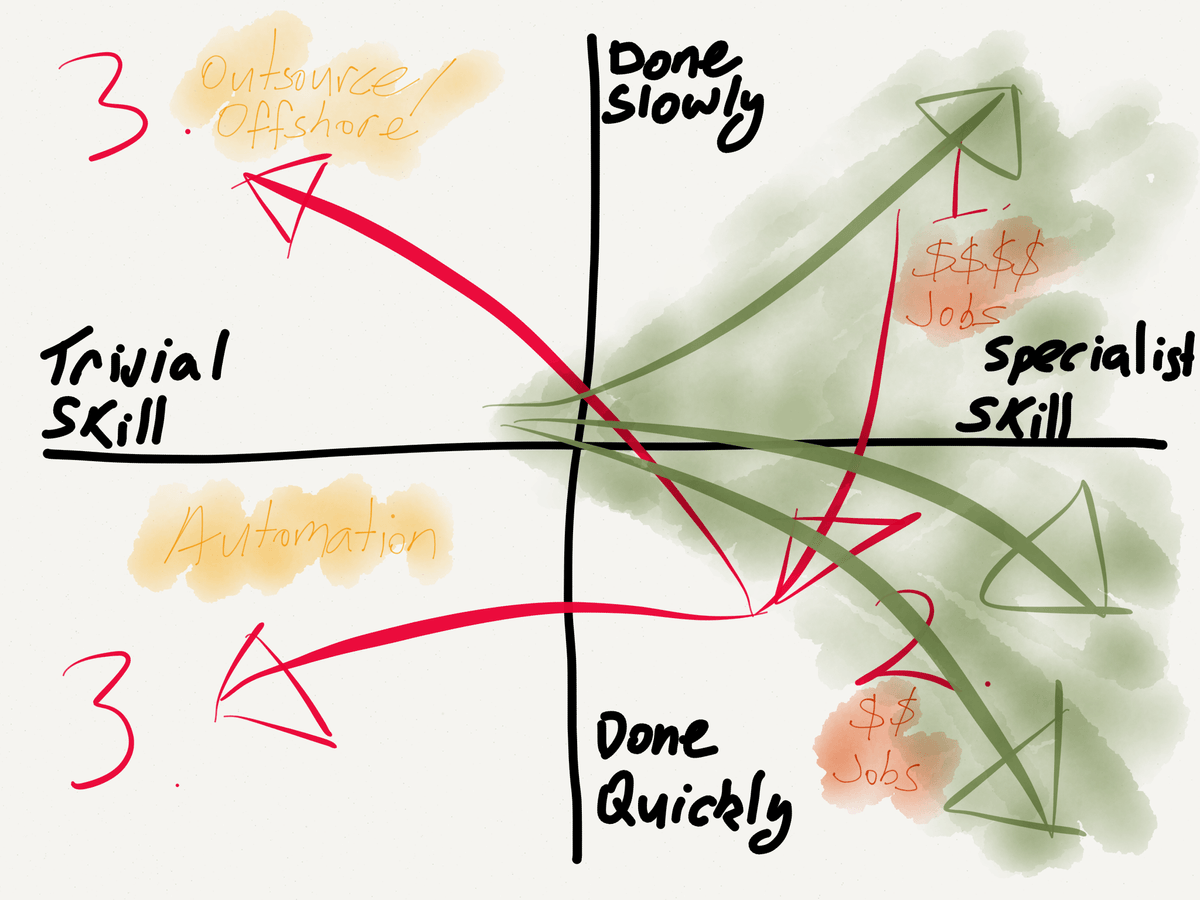